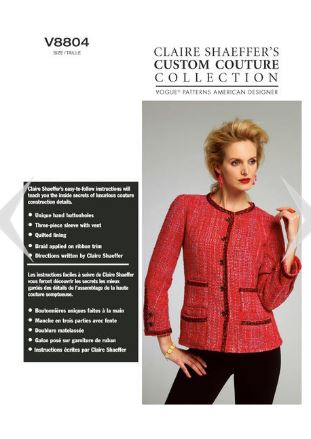 The first thing I have to do at this stage in the process of creating my Little French Jacket is review the pattern instructions for finishing the lining by hand and trimming. I know how to do this, but the pattern designer (Claire Schaeffer, Vogue 8804) has her own views that actually differ slightly from my experience.

In the past, I’ve always thought of the trim for the jacket as one of the last things to do – a bit like icing a cake. However, on this occasion, CS wants me to trim the jacket body before I even hand-finish the lining. The problem is that I haven’t got any trim yet! I’ll have to go shopping!

I really consider trim selection to be one of the most creative aspects of making on of these homage jackets. I’m not making a “Chanel Jacket”, rather I’m making one inspired by her designs that have themselves evolved over the years. And the trims that have been used on these jackets have varied wildly!

Here’s what a couple of the spring 2017 jackets looked like:

And the possibilities are endless! Recently, one of my very favourite couture sewing bloggers posted a terrifically informative piece on making Chanel-like trims using a Kumihimo braiding technique. [See “Create Custom Trim for Your French Jacket” on her blog Cloning Couture and I’m certain you’ll be as impressed and inspired as I was!]. This was a complete revelation to me and I immediately went to my Amazon account and put a Kumihimo disc and a book on how to create these braids on my wish list. That done, I realized that this isn’t going to happen for this jacket. I feel a winter project coming on! So, I’m better informed about the possibilities for trimming, but there will be quite a learning curve, and I’d like to finish this jacket sometime in the foreseeable future. So, what to do?

When I bought this fabric, I noticed that it had an interesting selvage in that it was a very nice fringe. So, I was careful to keep the selvages intact when I did my initial cutting.

I highly recommend this! I took a look at my selvages and I find that they will make a very subtle, Chanel-like, perfectly-matched trim for the jacket. So, I run a line of stitching along each of the pieces to prevent any fraying and trim them neatly. Then I press it and brush it with an eyebrow brush. Then it occurs to me that putting the trim on now is not only a new idea, but the only way I can do this. This trim will not sit on top of the edges; rather it will be sandwiched between the fabric and the lining. So, I hand stitch the fringe to the front edges and the neckline, and I’m ensuring that I have enough to trim the pockets and the sleeves when I get to them. It turns out I do, so all is well.

This jacket does not have any trim along the bottom for one very good reason: the lower pockets are close to the edge. It also seems to me that with four pockets that are each trimmed, any more trim would be just too much.

Once I’m finished hand-sewing the trim, I’m ready to pin and hand-finish the lining. I really love this process; it’s so meditative, especially when you have a high table to work on and good lighting. My little Ikea goose-neck table lamp works like a charm.

Before I actually get to the stitches, though, I have to pin very carefully. This is not an easy task since the fringe is on the inside and I have to get very close to the edge, but not so close that it will show. I think basting is the only way to go: the problem is that I don’t want the silk to be marked by the basting stitching which might be there for the few days it will take me to finish this. So, I baste a bit at a time with my Japanese cotton basting thread which marks far less even than the silk thread. I know this because I tried them both first!

I use an invisible ladder stitch with a single strand of silk thread as I’ve been taught and it gives a very nice finish. It’s pretty perfect I think! Now it’s really time to get on with the sleeves, which I have yet to touch. It’s getting there! 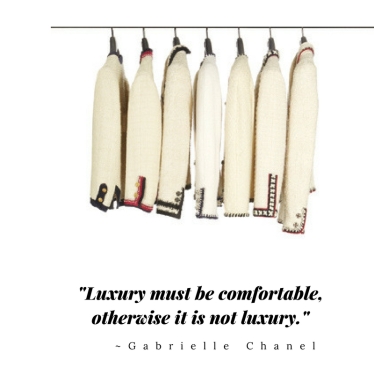 The more expensive the fabric, I buy, the more trepidation I feel just at that moment when, shears in hand, I hover above the swath of fabric on the table in front of me. I have already prepared the tweed bouclé by steaming it within an inch of its life, and I have carefully laid it out, in a single layer to ensure accuracy. I have carefully measured the grain lines and pinned them precisely where they are supposed to be. But this time around – on this third Little French Jacket – I’m using a slightly different approach to cutting. Rather than simply following a seam allowance, I’m just doing a rough cut. I’ll be marking seam lines and using those for a more accurate fit. And yet, here I sit, shears at the ready, taking a moment to pause and breathe before that first snip. Once that’s underway, I’m committed. Here I go.

This is actually fun, I think as I snip away ensuring a minimum of an inch (which I am eyeballing), all around the perimeter of the muslin pattern that I have already fitted and prepared. Once I have all of the pieces cut out, I am ready to thread trace all of the important markings.

I’m using a product that is new to me. When I viewed Susan Khalje’s couture dress class (I am working on the dress too, but that’s a whole different story!), she introduced me to the concept of Japanese cotton basting thread. She sang its praises so much that I had to have it. I also had to have her large sheets of waxed tracing paper that I used to mark the muslin pieces, so I ordered them all together.

It’s interesting stuff. I have these skeins in four different pastel shades and have selected the pink for my thread tracing. The instructions are to tie a ligature around the skein and cut it in one place. Then I am to take individual threads that will evidently come straight out, not disturbing the remaining thread. And it will be in the perfect length for basting they say. Well, it actually works. So I begin. 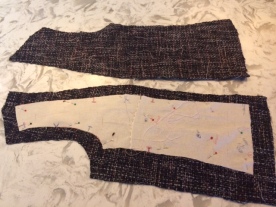 First I trace all of the seam lines. At the corner of each intersecting line, I use Clair Schaeffer’s method for taking the corner, knowing that I’ll be able to snip those corner threads to remove them in due course. And I know that I have a precise corner point.

I also use thread markings for the notches, circles, quilting lines on the front (as I mentioned earlier when I examined the pattern, I’ll make up my own mind about where to put the back quilting lines when I get there).

I have cut this out in one layer, but since I made up only a one-sided muslin pattern (that may not have been the best idea I’ve ever had), I do my marking and thread tracing as I go. In other words, I cut out one centre front piece, mark it and then take the muslin pattern piece off and cut out another one and so on. I have been very carefully marking the wrong side of the fabric with a piece of patterned tape held securely with a safety pin. The fabric is essentially the same on both sides, but it would be awful to find I’ve prepared two right front sides rather than a front and a left because I mixed up the right and wrong sides!

It’s important at this juncture to say that I am also being careful not to cut through any of the selvages. I am preserving them because they are fringed. I don’t know yet how I’ll trim this jacket — that’s a design decision for later. But I do know that I might want this fringe at a later date.

When all that marking is done, I move on to cutting out and marking the lining.

I love silk charmeuse against the body – but I’m not as big a fan of it on the cutting table. Usually, one would cut this in a single layer, but I am finding that using muslin as a pattern rather than any kind of paper pattern makes cutting this out double-layered so much easier. So that’s what I do. Again, I’m rough cutting because I’ll mark the stitching lines to use. I am using white waxed tracing paper and the same method I used with the muslin to mark the wrong side of the charmeuse. 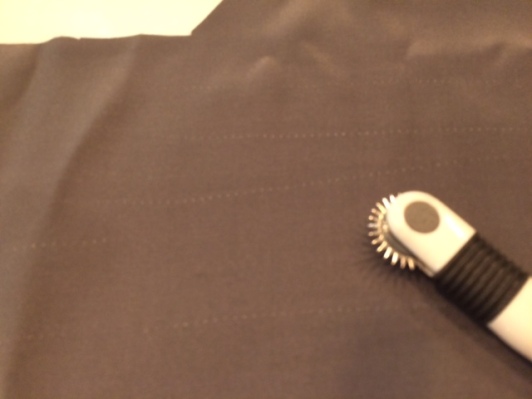 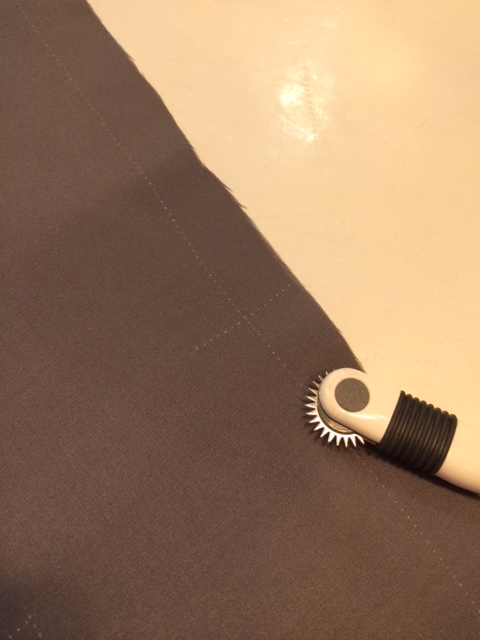 I also need to cut out a piece of interfacing – it’s really underlining in my view, though, regardless of what it’s called on the pattern – for the front of the jacket to support the buttons and buttonholes. In my previous jackets, there was no such layer since they had open fronts.

I test a few fabrics and realize that the only option that will give me the look and feel I want is, indeed, the silk organza – only pure silk will do.

And so, now I’m ready to test stitches, cut out little pieces of iron-on interfacing to place behind the buttonholes, and start sewing. A jacket is on the horizon!

Topics I write about

Lately I’ve been writing about…

Other places to find GG